In the second of our online sermon series, the Revd Dr Lynda Taylor preaches on John 4:5-42.

The Woman at the Well

Our reading today from John’s gospel recounts the well-known story of how Jesus met a woman at a well and how, through their encounter and conversation, he was able to change her life, transforming a damaging past into a promising future.

It’s a moving and inspiring story but there something that’s always puzzled me about John’s account of this meeting. How did John know about it to include it when he wrote his gospel? After all, there were only two people present during the interaction at the well – Jesus and the woman. There’s a little verse in brackets – verse 8 – which tells us that Jesus’ disciples had gone into the nearby town to buy food. So they were clearly not there when Jesus had his conversation with this unfamiliar woman at the well. And indeed, if the disciples had been there, they may well have prevented Jesus from having any interaction at all with her given the social and religious conventions of the time and the circumstances of this particular woman. But thankfully they weren’t there, and Jesus was free to be radically generous with his time and his words, as he so often was.

So where did John the gospel writer get his detailed account of the exchange between Jesus and the woman at the well? Was it from Jesus himself? On their return from the neighbouring town, did the disciples receive from Jesus a blow-by-blow account of his conversation with this feisty and articulate woman? Or was it the woman, who later on told her story to John so that he could write it down for future generations, including ourselves, to hear and read and learn from? We’ll never know, but if it was Jesus, then he presumably told his disciples what had happened in such great detail because it was important and they could learn from it. And if it was the woman, then it’s because her encounter with Jesus had such a powerful and transforming effect on her life that she couldn’t help but share it with any and all who would listen to her story, as we see at the end of the passage.

So let’s attend to her story in a little more detail and see what God might want us to pay attention to from it for our own lives.

The setting is clear. Jesus and his disciples have left Jerusalem and the southern region of Judea to return to the northern region of Galilee. They are travelling back to Jesus’ home territory where the majority of his ministry will take place over the next three years. Their journey takes them through Samaria whose inhabitants, the Samaritans, were a mixed-blood race due to intermarriage between Jews and Gentiles many hundreds of years earlier after the exile. This led to great hostility between Samaritans and those who considered themselves to be pure Jews, hostility which endured in Jesus’ day. Eating or drinking together was unacceptable, and beliefs and practices in worship were radically different as we learn from John’s account.

It’s the middle of the day and Jesus is tired and thirsty, so he stops at a well, and when a woman approaches to draw water, he asks her for a drink of water. At first glance, there might appear nothing unusual in this. But Jesus, as a Jewish rabbi, is stepping way outside the social and religious boundaries of his day on a number of counts. First, he is interacting with a woman, alone. Through just being there, and worse still talking with her, Jesus is risking potential scandal. The disciples’ reaction on their return show how shocked they were at this sight. Secondly, she is a Samaritan woman, with whom it was not considered appropriate or even safe to engage in conversation. According to Jewish law, accepting a drink from her would entail ritual contamination for a faithful Jewish man. And third, to cap it all, she was a woman of doubtful reputation. The normal time for women to fetch water from the well was in the cool of the early morning or evening, rather than in the heat of the day, so perhaps this woman has come at the time when she is least likely to meet anyone – or at least anyone who knows her, her past and her dubious lifestyle which later becomes evident. 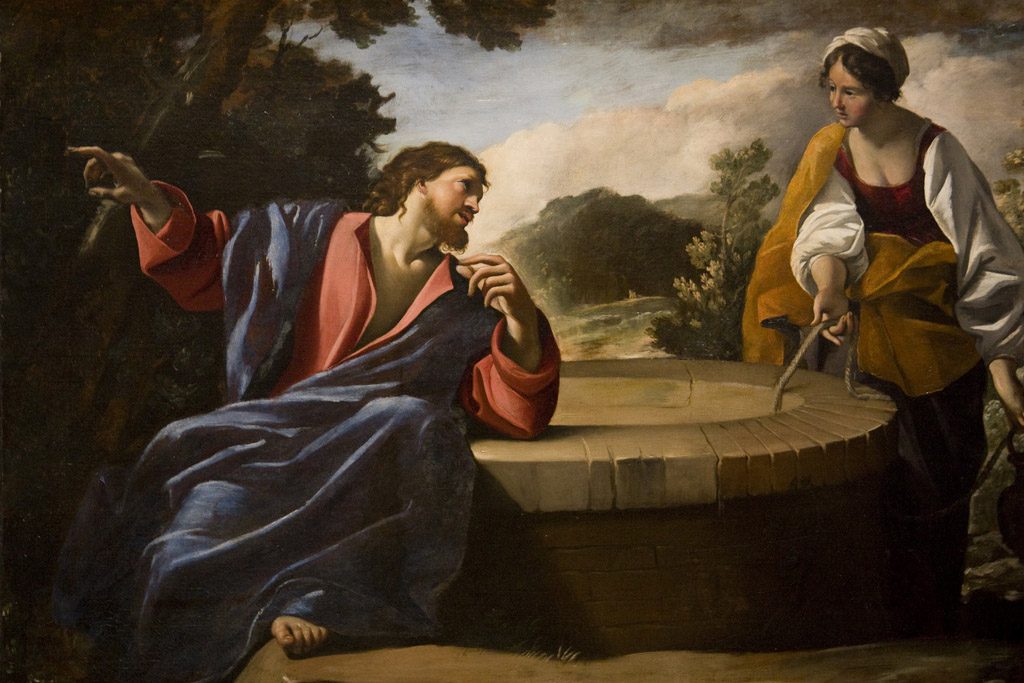 But Jesus knows all this – and he still engages her in conversation – a friendly but sometimes challenging conversation with a teasing, double-meaning flavour to it. It’s a technique Jesus uses so often in the conversations recorded in John’s gospel. Remember Nicodemus in the previous chapter and that confusing exchange about ‘being born again’. Very often, Jesus is talking at the heavenly level, about spiritual truths, while the people he is talking with are listening at the earthly level, thinking only in literal terms. So the conversation with the Samaritan woman about ‘a drink of water’ becomes a game of wordplay between them. In her shock and confusion at being addressed directly by this Jewish man, the woman doesn’t realise Jesus is talking about a different kind of ‘refreshment’. He is offering her something far superior to well water. He is offering her ‘living water’ – fresh running water that flows freely, constantly refreshing itself like a spring or river, in contrast to the stagnant water of the well. Jesus is using the image of water to point to the spiritual renewal that comes with the indwelling of God’s spirit within us. The Samaritan woman is drawn in and wants to know more. She’s not quite sure what Jesus is on about but is certainly ready to take things further. Perhaps she’s attracted by the physical promise of no longer having to make her daily walk to Jacob’s well to draw water in the heat of the day.

At this point Jesus gently but firmly puts his finger on the key problem in the woman’s life – her marital status and the nature of her relationships with men. We don’t know why the woman has had such a chaotic string of married and unmarried relationships, and we don’t how much she was or was not responsible for the situation herself. But we do know that Jesus wants to help her deal with her past, to leave the mess behind and to move on to a new and promising future.

If we want to take Jesus up on his offer of running, pure water, bubbling up inside us, then the truth is that we too will have to get rid of the stale, stagnant water that we have been living off thus far. The church’s season of Lent offers us just such an opportunity to reflect on and reject those attitudes and behaviours that get in the way of our relationship with God and with one another so that we can be refreshed and invigorated with his new life.

The woman’s reaction to Jesus’ unexpected challenge about her lifestyle is understandable – she seeks to change the subject. And, as is often the case today, the best subject for distracting attention from morality is to talk about religion instead! So the woman launches into a debate about where the right place for worship is. But God’s offer of a new kind of human life for all who give up the stagnant water and come to him for the living variety is absolute, and it can’t be avoided by questions about which is the true holy mountain or which church is the right one. Jesus’ response to the woman suggests that from now on holy mountains don’t really matter very much. Holy mountains and holy buildings are at best signposts to God. However magnificent a holy mountain, however beautiful a village church, if they become an end in themselves and fail to point people to God then they become idols diverting us away from God. It’s good to see recent developments here at St Michael’s, Caldecote in which attention to the building and fabric of the church is firmly in the service of wider mission and ministry, rather than being an end in itself.

The woman makes one last attempt to counter this intriguing man at the well and to put a lid on their conversation, not realising that this will leave Jesus with the final, definitive word. ‘Well’, she says ‘one day the Messiah will come and he will make all things clear. Why don’t we wait till then?’ Jesus is quick to take advantage of this opening and he simply responds ‘Well, that’s me.’ Jesus is the final, definitive Word.
And Jesus continues to say that in our own age today. Theologian Tom Wright, former Bishop of Durham, puts it like this (1): Whenever people come round to the key questions, and say ‘If only someone would come and sort it all out!’, then there Jesus is. ‘That’s me.’ Waiting to do what he does best.

Let us pray: Heavenly Father, thank you for what we can learn from this account of Jesus’ conversation with the Samaritan woman at the well. Help us to continue to use this Lenten season to empty out the stagnant waters of our lives and to continually seek your face that we may be filled afresh each day with the living water of your Spirit. Amen.

The Signs are Good!

Support The Signs are Good! to build up a printing fund and make our noticeboards objects of beauty! Click to donate

This should be a lot of fun this afternoon - a picnic in Childerley gardens followed by a performance of Much Ado A… https://t.co/mXEGE2y9uw
h J R
@caldecotechurch