This Sunday (17th Dec) is special – not only do we get to sing our favourite carols and eat mince pies, but we also meet the new Vicar!

The Revd David Newton was appointed back in the summer, to take up the position in December – just in time for his first service at Caldecote to be Carols by Candlelight. We’re excited about David’s arrival, and are looking forward to getting to know him in the months ahead.

A bit about David 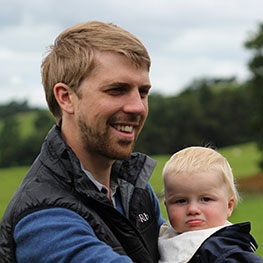 David studied Theology at Cambridge before training to be a teacher. He taught Religion and Philosophy at a school in Surrey where he met his wife, Sally. After training for ordination in Durham he took up the position of Assistant Curate in the Ely Team in July 2015, where he was lead minister for one of the churches in the Team as well as heading up some particular Team-wide projects.

In addition to being Vicar at Caldecote, David is also responsible for our neighbouring parishes of Toft and Comberton. He and Sally have a smiley little boy called Toby; there is a little girl on the way too (due Feb 2018). When time allows he loves taking their Black Labrador for walks in the Cambridgeshire countryside, and curling up by a fire with a good book.

Hear from David himself in his message in the latest issue of the Caldecote Journal.

The Signs are Good!

Support The Signs are Good! to build up a printing fund and make our noticeboards objects of beauty! Click to donate

This should be a lot of fun this afternoon - a picnic in Childerley gardens followed by a performance of Much Ado A… https://t.co/mXEGE2y9uw
h J R
@caldecotechurch